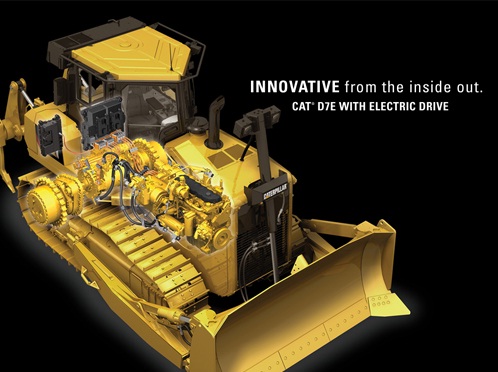 With its breakthrough electric drive system, the all new Cat® D7E Track-Type Tractor has been generating intense interest in the heavy equipment business. Now, this new mid-size dozer is making appearances around the country to give operators and owners a firsthand look. The D7E “road show” came to Sacramento on June 11th for a special demonstration event hosted by Holt of California, Caterpillar dealer for Central Northern California.

“Tour of the Century”

Dubbed the “Tour of the Century,” the event’s name celebrates the first all new track-type tractor produced during the second century of Caterpillar tractor innovation. Caterpillar predecessors Benjamin Holt and Daniel Best were industry pioneers in the early 1900s. The Holt Manufacturing Company and the C. L. Best Tractor Co. merged in 1925 to form the Caterpillar Tractor Company.

The D7E is a far cry from the machines of the early 1900s. The result of constant innovation in Cat dozer design, technology and manufacturing, the D7E features an advanced diesel-electric hybrid drive system that transfers power to the ground very efficiently. It works together with an updated differential steering system to give the D7E an unprecedented combination of straight ahead dozing power and nimble maneuverability.

The D7E “Tour of the Century” event was held at 7310 Pacific Avenue, Pleasant Grove on June 11th. Caterpillar product experts worked with representatives from Holt of California to explain how the electric drive system works and preview other new D7E features. Live machine demonstrations showed off the machine’s impressive dozing power and its ability to work effectively in surprisingly tight-quarters.

Holt of California’s Sales Manager Bob Redding encouraged medium sized tractor users to attend the event. “We’re excited to have the D7E in Sacramento this month. Whether you’re looking to upgrade your existing equipment or just interested in what the future of heavy equipment looks like, this is the first chance to see the D7E at work.“